Editor’s note: As a reminder – Still Standing is a place for all grieving parents. If you grieve the loss of your child, no matter the circumstances, you are welcome here. We ask that all conversation be kept respectful and civil. All comments are moderated on our site.

When we chose termination for medical reasons (TFMR) for our daughter, Cora, in August of 2009 – no one was talking about it.

I sat in the hospital imaging room; I sat across from the panel of neurologists and counselors, I sat in the waiting room of the clinic feeling like literally the only mother who had ever chosen this path.

I didn’t know anyone who had had an abortion and the only time I’d been exposed to the concept was in the instance of unwanted pregnancy, or maybe if the woman had been assaulted.

It wasn’t even on the radar for someone like me – financially stable, married, already mother to an 18-month-old child; I was a woman who had grown up wanting a house full of children for her entire life.

‘Abortion’ was never in my language.

I Am The Face Of A Heartbreaking Choice

When I describe myself as ‘shell shocked’ at hearing the news that our daughter, at 22 weeks in utero, didn’t have more than a developed brain stem inside of her skull, that her brain cavities were filled with cerebrospinal fluid instead of brain matter – that description doesn’t do it justice.

I was 27, had had one easy pregnancy and birth already, no fertility issues, no developmental worries, no family history – in a big giant family crawling with aunts, uncles, and cousins – of any genetic problems whatsoever.

I was a ‘lucky one,’ a sheltered one.

I was as unprepared for tragic news as an adult can be.

I refused to consider any option but carrying to term. I researched for hours about how to care for a newborn, and then an infant, with catastrophic brain anomalies.

I had a C-section scheduled for 32 weeks. At 23 weeks gestation, her skull was already measuring 31 weeks on the left side and 19 on the right.

I wrote the numbers down in a notebook as if that would make them – or anything – make sense.

There were voices all around me. Some urged me to consider TFMR, some praised me for not considering it, most just said how sorry they were and that they had no idea how I could stay so strong or how I was still going to work every day, still cleaning my house, still parenting my toddler son, still going, still living.

I don’t know either. Trauma autopilot is a powerful tool.

Then I heard one story that separated itself from the din.

I was told that a very close family member of mine had had a TFMR thirty-five years before when it REALLY wasn’t being talked about, so much so that most of the family still didn’t know it had ever happened.

On Choice And Letting Go

It was the first time that I looked at TFMR as an option that I could truly consider.

If this woman, who I had cherished and admired for all of her living years, who had exemplified everything I respected in humanity, had made that choice then – maybe I didn’t have to be so scared to admit that it had crossed my mind as well.

Because at this point, my research had led me to the obvious.

The chances of Cora living into teenagerhood were minute, and the average life expectancy for her diagnosis was one year.

The debate over how much pain she’d be in depended on what article I read, which doctor I asked.

Empathy In The Impossible Choices

The consensus was that she could be ‘kept comfortable’ with medication. I took in all the information, recorded it in my notebook, pretended to still function like a normal human being while inside, my world was crumbling to dust.

TFMR went from being a choice to THE choice after five long weeks of visiting more and more doctors, vainly hoping that one of them would tell me something less dire but none of them could.

After weeks of consulting with family, friends, my minister, counselors, and Boston’s top medical professionals, we chose to deliver our baby girl sleeping.

I Didn’t Choose Death, Death Chose Me: On The Late-Term Abortion Law In New York

And so I own that part of it and live with that responsibility every single day, just as I live with each parenting decision I make for my living sons.

I did not keep my TFMR a secret as my family member had back in the early seventies. I told everyone in my social circle and let the consequence of it be what it may.

I felt like I owed it to my family member, owed it to my daughter, to refuse to act as if I’d done something out of fear or apathy when it had been done out of love.

I was overwhelmed with acceptance and support because these people knew me, and they knew that this had broken my heart. They came to her funeral; they saw her headstone; they read my teary social media posts.

They got it because they were close enough to see it.

But in the broader social conversation, I was met with vitriol.

There Is A Story Behind Every Loss

I read so many hurtful and inaccurate things. That I couldn’t have loved my child, that I’m not allowed to grieve her, that I was selfish, that I should have given her away to someone more compassionate, that I wasn’t as strong as a mom who carried to term.

I can handle the judgment because I know my truth and because I’m blessed to have a wide circle of love that drowns out the noise.

But, and I say this with great gentleness, we all know a woman who has TFMR, even if we don’t know that we do.

I Can Love My Baby, Grieve My Loss, And Still Have Had An Abortion

I went twenty-seven years not knowing that one of my closest relatives had had one herself, and I’m sure I would have never been told had I not found myself in a similar situation.

The statistics are such that it’s just not possible to have never come across a TFMR mom.

She is there or has been there, in your life, silent and ashamed, scared because she has been made to feel like the only woman suffering the pain of this choice; the pain of this unique loss that aches every bit as much as stillbirth (I’ve had two) yet receives almost none of its grace or support.

I chose to give TFMR a face.

I chose to give TFMR a voice.

I chose to be the person who receives email after email from old high school friends, college friends, work colleagues who say, ‘I don’t tell most people, but I made this choice, too.’

On Being Both Pro-Life and Pro-Choice

I didn’t choose to be vocal about it for me but her, for Cora, because it is HER face, and HER voice, that makes me able to understand love, sacrifice, and motherhood in a way I never imagined.

It is because of her that I understand how gray the world is when I used to be so convinced that it was merely black and white.

She is my daughter, present tense, and I am allowed to love her, honor her, and speak of her freely with every ounce of my being.

And you are allowed to do the same. 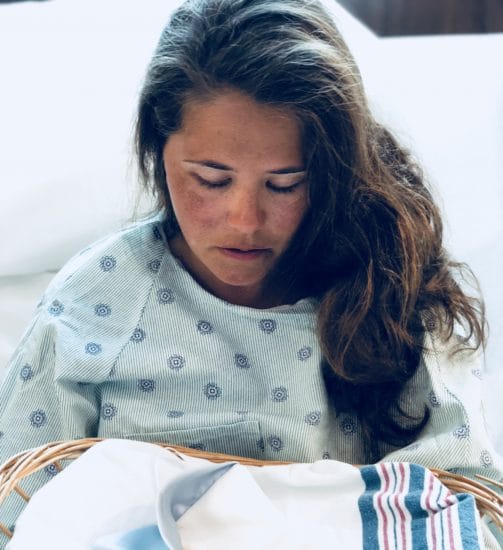 Angela is a married mother of six beautiful children, two on earth and four in Heaven.

Previous Post: « I’m Sorry I’m Not The Person I Used To Be
Next Post: Stuck In Grief »