In 2005, my second child was stillborn. It was then that I discovered yoga. It is important for me to say at the outset that I had not practiced yoga seriously before, and that I did not understand the benefits a practice could offer. I say this because I want readers to understand that I was, in certain ways, an unlikely candidate to be a yoga convert. Nonetheless, I discovered yoga when my friend Alex came over and told me to lie on the floor with my legs up against the wall. “Ok,” she said. “We are going to breathe now.” In breath, I discovered a way to temporarily relieve the nausea-like effects of severe anxiety. The kind of anxiety that cuts you, and shallows your breath.

Research shows that baby loss often leads to Post-Traumatic Stress Disorder (PTSD) for both women and men. Symptoms can include insomnia, anxiety, and flashbacks. Says internationally renowned trauma expert Dr. Bessel van der Kolk, “[W]hat most people do not realize is that trauma is not the story of something awful that happened in the past, but the residue of imprints left behind in people’s sensory and hormonal systems. Traumatized people are often terrified of the sensations in their own bodies. Most trauma-sensitive people need some form of body-oriented psychotherapy or body work to regain a sense of safety in their bodies.”

In the months following my son’s death, yoga enabled a pathway for me to experience myself in my body again. In a rich and saffron-hued yoga studio, lit in the evening with candles, I learned to stay in a moment even as I yearned to escape it. Alone, I wanted to shed my sensory self as a snakeskin and leave it somewhere for someone to come upon and wonder at. Everything was profoundly triggering and I felt as if the entire world was a flame. I was hyper-vigilant to what I perceived to be the probability of sudden loss. I could only eat miso soup, and I barely slept.

I could not escape the memories I associated with my son’s stillbirth – the frigid air against my skin, the fact that I was still bleeding, and the pale moonlight that flooded the sky all night, and turned the dusky snow blue. Says Licensed Clinical Social Worker and Certified Yoga Instructor Allison Gould, “[W]e tend to spend a lot of time thinking about the past and a lot of time wondering about the future. It is much more difficult to stay focused on what is happening right now. People who have experienced traumatic loss are especially prone to ruminating about their loss experience and worrying about what lies ahead.”

And still, in a pose, I could hold on. According to Dr. van der Kolk, “ [Y]oga helps regulate emotional and physiological states … [W]hat is beautiful about yoga is that it teaches us – and this is a critical point for those who feel trapped in memory sensations – that things come to an end. The process of being in a safe space and staying with whatever sensations emerge and seeing how they come to an end is a positive imprinting process.” It has always been a source of shame to me that I have trouble crying. In yoga, I could cry the kind of tears that made my nasal passages throb in a salty good kind of way, my throat unclench, and my eyes feel wonderfully tired as though I could close them and they would just stay.

Lying on heavy woven yoga blankets and deep in winter, I listened to my instructor explain paths to enlightenment. I don’t know enough about them to try exploring them here, but there was such exquisite beauty in the mere notion of being released from suffering. My mind was truly open to ideas of dimensionality in a way it had hitherto long since lost. My mind was scattered as my body was sprawled on the mat: both were trying to reintegrate. The whole of me was trying to emerge. I felt like a photo in a tray at a film developing studio, first blank and then an image tremulously appearing.

According to Dr. Van der Kolk, “[T]he rational brain is the crowning glory of human beings. It is there to help us engage in the world, but it is not very good in helping us take care of ourselves … in other words, the rational mind, while able to organize feelings and impulses, is not well equipped to abolish emotions, thoughts and impulses … [P]eople with PTSD, usually are out of touch with their physical sensations, and, as a consequence, have trouble taking care of themselves.”

It was liberating to let the rational mind go as much as I was able. Because it was faith of different kinds and traditions along a continuum of the absolute to the highly skeptical that got me through. As with Lucy in the wardrobe, Narnia-bound, I found in me, enough (never wholly, but enough), the capacity to believe in the not quite impossible. Yoga and meditation provided a critical conduit towards meaningful integration of pain and loss and fear.

In the years since, my practice has suffered, in that I don’t really practice yoga now. Perhaps I will again. Still, I remember my brief devotion to yoga with immense gratitude for the true and singular comfort it offered me. In loss, it is necessary, good and correct to seek the things that sustain one – things at can strengthen one like a strong spine or a meditation on which to attach a new self in a world that is necessarily transformed. 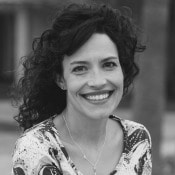 I’m small, but scrappy! I have a fierce passion for my family, friends and life in general…I’m a military spouse who has battled infertility for over 13 years, as well as the loss of two babies gone too soon. I love to laugh, and am grateful for every second I celebrate with the ones I love. You can find me at my blog Lori Does Maryland or on Facebook Lori Mullins Ennis or on The Twitter here Lori M. Ennis

Previous Post: « The Man in Black and the Girl in Pink and Blue
Next Post: Over and Over Again »